This article comes from our research partners at the Capital Group. The original authors are Stephen Green, Chris Thomsen, and Winnie Kwan. We hope you enjoy.

China: 3 views on what’s next for its economy and stocks KEY TAKEAWAYS

China was the first country to shut down its economy to blunt the spread of COVID-19, and the first to emerge. As the world’s second-largest economy and a key cog in supply chains and consumer markets, China’s economic progress over the next 12 months will play a vital role in restarting the worldwide economy.

Since the outset of the pandemic, China’s policymakers have been far more restrained in terms of stimulus compared with the U.S. and European Union. They have sought to stabilize the economy rather than flood it with too much credit like in prior economic downturns. While tensions with the U.S. continue to weigh on its economy, China has developed a powerful domestic demand engine, and government leaders are focused on increasing domestic spending and unlocking the significant savings of the country’s populace, which are much greater than those of Western countries.

So far, China equities have fared relatively well as measured by the returns of the benchmark MSCI China Investable Market Index. And China’s economy rebounded in the second quarter. But bouts of volatility are likely amid a tepid rebound in consumer activity, supply chain concerns and differing opinions about the strength of China’s economy. This could offer investors with a bottom-up, long-term approach selective opportunities to take advantage of periods of market weakness, especially given the persistent and potentially increasing geopolitical tensions.

We asked two longtime Capital Group portfolio managers with years of experience living and working in Asia for their views on China’s getting back to work and what kinds of companies might benefit. We’ll begin with a macro-level perspective from our chief China economist.

Recovery likely gradual and stimulus unlike past downturns

Overall, China’s industrial economy is largely operating back at normal levels, and leading activity indicators such as trucking volumes, electricity production and weekly cement shipments are mostly back to 2019 levels or higher. However, I believe the return of growth will be slow and gradual.

Industrial profits remain weak, and China’s exports could decline as much as 20% to 30% on a year-over-year basis; though so far, exports are holding up surprisingly well. Consumption is generally lagging due to elevated unemployment levels and fears of possible pay cuts. The majority of households report in surveys that their incomes are down year-on-year. People still seem to be reticent to leave their homes, and some of this is reflected in data for travel and dining, which are well below 2019 levels. 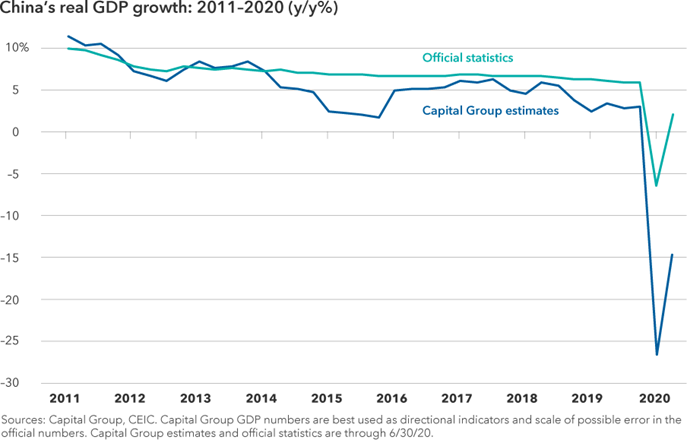 Gross domestic product: Our research suggests that China’s economy contracted far more in the first quarter than the government’s official 6.8% decline. While China reported year-over- year second-quarter growth of 3.2% on an annualized basis, I project China’s economy will see no growth for all of 2020, which contrasts with the sell-side consensus forecast for modest GDP growth.

Stimulus package: As the scale of the growth shock becomes clearer, Beijing is launching a mini-fiscal stimulus package. Don’t expect the stimulus to be of the same magnitude as in the global financial crisis. It could amount to five percentage points of gross domestic product, compared with 10 percentage points following the 2008–2009 global credit shock. This could be enough to stabilize China’s economy in the second half of 2020 and provide some support to growth in 2021; it usually takes 12 to 18 months for credit to work its way through the economy.

New infrastructure: Much of the stimulus will go toward infrastructure — things like upgrading the electricity grid and building metro and suburban rail networks, as well as improving the environment.  But Beijing also wants some of the funds to go into “new infrastructure” spending that would pave the way for the development of 5G telecommunications networks and data centers.

Local champions begin to emerge in technology and health care

While the success of Tencent and Alibaba is well-documented, the coronavirus outbreak underscored the capabilities of some companies that may emerge as the next set of domestic champions within China’s technology and health care–related sectors.

I believe the more innovative domestic companies may continue to benefit from an emerging trend of localization, or the procuring of goods and services from within China, that has partly come about given the dislocation in some supply chains and structural trade issues. To some degree, we have begun to see some of this activity in the fields of enterprise software and semiconductors. Meanwhile, the health care sector has been a natural beneficiary of COVID-19, and the pandemic should further accelerate the development of this industry within China.

Cloud computing: China has lagged the U.S. in adopting cloud-based technology. Startups and internet companies have been among those utilizing it, but traditional Chinese businesses have been particularly slow. Working from home changed the dynamic significantly, and companies unable to operate during the lockdown were forced to look for cloud-based solutions. An emerging participant is Kingdee International Software Group, which competes against Germany’s SAP and U.S.-based Oracle.

Semiconductors: China wants to strengthen its capabilities in the semiconductor field as part of a broad plan to become more self-sufficient in key areas of technology. Silergy Corporation, which designs and manufactures a broad range of high-performance analog integrated circuits and is gaining share in China’s chip market, may benefit as the market is projected to grow substantially with demand for 5G and cloud-computing applications. In the first quarter, company sales rose 42% to $95 million versus the same period in 2019.

Biotechnology: Through their internet-based platforms, Tencent and Alibaba have seen a massive surge  in activity for their health care services, with people connecting to doctors on their mobile devices. There are also Chinese biotechnology companies on the front lines of developing vaccines for COVID-19. Overall, China’s aging population and demand for higher quality services from private sector hospitals could present intriguing opportunities for investment in the years ahead. 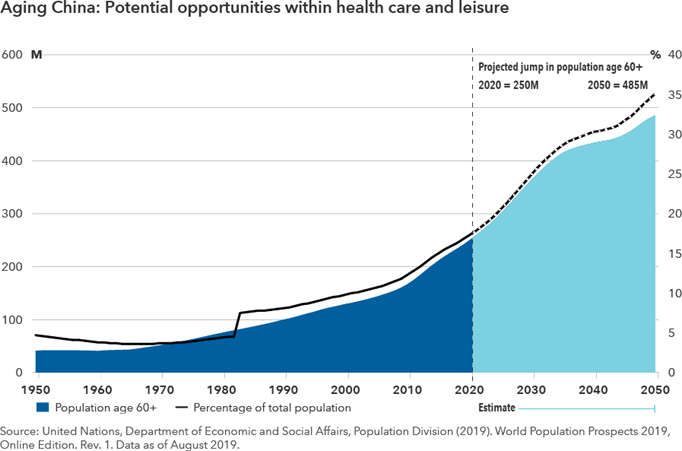 China’s middle class has developed a love of travel. They were frequently in search of new overseas experiences before the pandemic brought travel to a halt. Before the shutdown, the number of international flights from China had grown an average of 16% per year since 2000, boosting tourism and travel-related stocks. The current trajectory of that growth remains unclear, and I’m not certain when air traffic will return to pre-coronavirus levels.

After the SARS pandemic in 2003 and 2004, tourism and travel across Asia eventually rebounded as governments put standards in place and the public gained confidence that those measures were effective.

Despite recent setbacks, there is a long growth runway for travel-related services in China. Possible beneficiaries could be Shanghai Airport and Guangzhou Baiyun International Airport. Both are geographically positioned in desirable regions within China.

COVID-19 has changed consumption patterns in China. The migration to digital services has accelerated — from cooked food and fresh grocery delivery, to online medical and education services.  Meituan-Dianping, China’s largest food and services delivery platform, has replaced Baidu as the third-largest internet business after Tencent and Alibaba.

There is also an increasing focus on health and wellness, with a greater share of the consumer’s wallet dedicated to food safety, exercise and private health care. As a result, I anticipate growth in protection-based insurance products to have a long runway.

Affluent consumers in Tier 1 and Tier 2 cities (larger GDPs) are still confident, while consumers in Tier 3 and 4 cities (smaller GDPs) have become even more price sensitive. Based on our research,  premium brands and trading up are still relevant themes in more affluent Tier 1 and 2 cities. Meanwhile, national mass market brands have found it difficult to maintain pricing power.

Luxury goods, premium cosmetics and skin care have experienced strong recovery since China's economy reopened in March. This has benefited multinationals that have a significant presence in China with portfolios of aspirational brands. European luxury brands face less competition from domestic Chinese companies.

Outside the larger cities such as Beijing, Shanghai and Shenzhen, people are increasingly price wary due to employment concerns. Millions of migrant workers have yet to return to their jobs, and a large number of college graduates are trying to find jobs. Internet-based platform Pinduoduo has enabled cost-conscious consumers to compare prices and buy goods in bulk.

During the first quarter, the company saw its average monthly users increase 68% to 487 million year over year.

Over the next 12 to 24 months, travel patterns should temporarily shift from international to domestic destinations due to restrictions and some degree of scaling back by price-sensitive consumers. 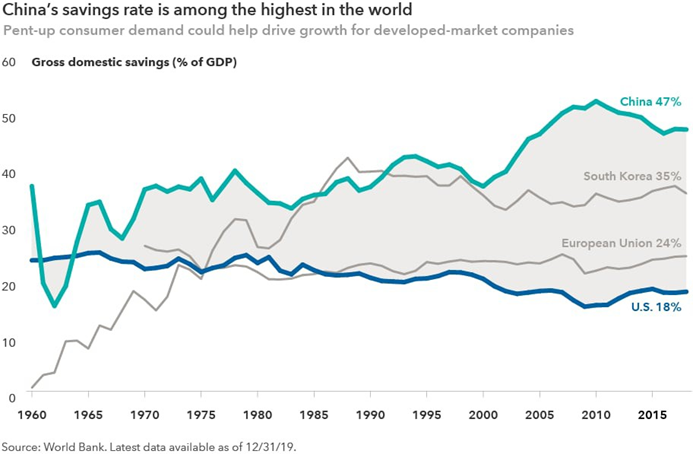 The quality of companies varies significantly

It can be easy to lose sight of long-term trends and potential investment opportunities amid a barrage of political rhetoric and heightened geopolitical tensions. Capital Group has been visiting Chinese companies and investing in them for several decades now. China is home to many innovative companies with large addressable markets, offering the potential for sizable long-term growth in market value.

More than ever in this rapidly changing and uncertain global business environment, stock selection is key, since the quality of companies in China varies significantly and sectors are at different stages of maturity.

Stephen Green is an economist covering Asia. He has 16 years of investment industry experience. He holds a PhD in government from the London School of Economics and an honors degree from Cambridge.

Chris Thomsen is an equity portfolio manager with 22 years of investment industry experience. He holds an MBA from Columbia and a bachelor’s in international economics from Georgetown.

Winnie Kwan is an equity portfolio manager with 23 years of investment experience. She holds master’s and bachelor’s degrees in economics from Cambridge.