This article comes from our research partners at the Capital Group. The original authors are

Reagan Anderson, Jason Bortz, Matt Miller and Michael Thawley. We hope it is helpful to you.

Now that the results of last week’s U.S. elections are coming into focus, investor attention is shifting to the policy implications of a Joe Biden presidency. Bottom line: Don’t expect big, sweeping changes in the years ahead.

With a Democrat in the White House and Republicans likely maintaining control of the Senate, consequential changes will be difficult to achieve in a familiar environment of Washington gridlock. That may prove to be the best of both worlds from an investment perspective

“Assuming the base case of a divided government holds, major tax increases should be off the table at least for the next two years,” says Jason Bortz, senior counsel at Capital Group who specializes in tax and retirement plan issues. “I think the 2017 tax cut bill — President Trump’s signature achievement — will stand.”

Of course, that outcome hinges on the continuation of a Republican majority in the Senate, and not all Senate races have been resolved, Bortz notes. Two Senate races in Georgia are headed for a January 5 runoff election, which could change the equation. However, it’s been 20 years since a Republican lost a Senate race in Georgia, which requires an outright majority to win statewide office.

U.S. corporate taxes are likely to remain low under a split Congress 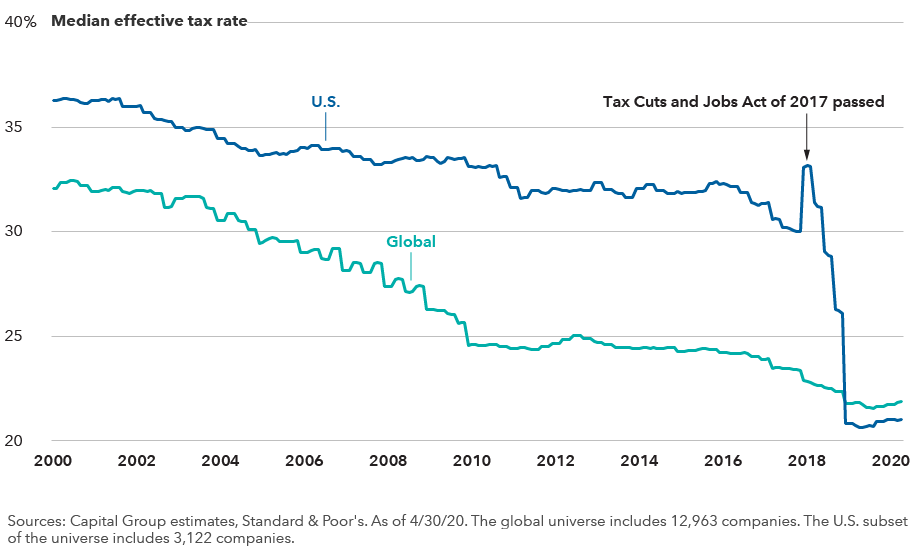 
In addition to Georgia’s unresolved status, a degree of uncertainty remains around the presidential election results. While Biden has been declared the winner by major news organizations, the Trump campaign has filed a flurry of lawsuits challenging the results — claiming election fraud and other irregularities in several key states. Recounts are also likely in Georgia and potentially other swing states where media outlets have declared Biden the winner. While those efforts are unlikely to change the outcome, they can’t be completely dismissed either, says Capital Group political economist Matt Miller.

“I think we have to be prepared for a few weeks of litigiousness,” Miller says. “The Trump team will pursue every available legal challenge, and there could be some twists and turns before it’s all over. From an investor’s point of view, all we can do is keep calm and carry on while they work their way through the process.”

The top priority will be a COVID-relief stimulus bill, which might even happen before Inauguration Day. The idea has bipartisan support; however, Democrats and Republicans have so far not been able to agree on a dollar amount. That could change now that Election Day has passed.

“After the dust settles, I am cautiously optimistic that the Senate can work with the House of Representatives to get something done,” says Reagan Anderson, a senior vice president on Capital Group’s government relations team. “In my estimation, there is bipartisan support for roughly $1 trillion in spending, which is half the size of the previous relief bill, but it’s probably a compromise that Republican and Democratic leaders can live with.”

Other Biden administration priorities may include a modest infrastructure spending bill, immigration reform and drug pricing reform — all of which have some level of Republican support. The environment and climate change probably will move front-and-center, as well, including policies to encourage green investing and more disclosure related to environmental, social and governance (ESG) matters.

On the other hand, as long as Congress remains split, specific tax policy proposals are not likely to see the light of day, including corporate and individual income tax increases, a capital gains tax hike and a financial transactions tax.

“We also expect no change to the Senate filibuster or to the number of justices on the Supreme Court, both of which became hot-button issues during the campaign,” Anderson adds.

U.S.-China relationship will continue to be a key issue 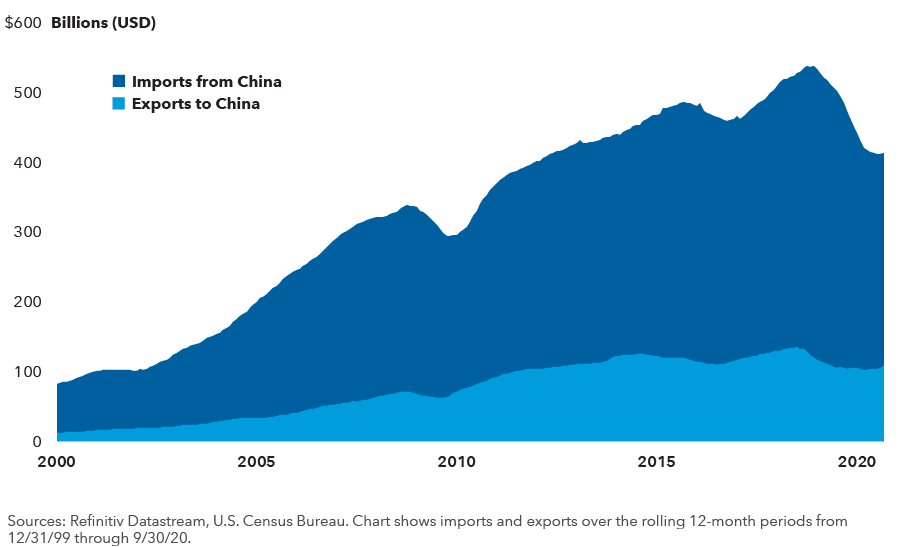 On the foreign policy front, U.S.-China relations will almost certainly remain the top priority under a Biden administration, says Michael Thawley, a Capital Group political economist and formerly Australia's ambassador to the United States. While Biden's foreign policy team will approach China in a more strategic and less confrontational fashion than Trump, they probably will take a tougher stance than the previous administration did under Obama.

Biden’s trade policy toward China will likely borrow some tactics from the Trump administration, such as the use of tariffs. Technology and investment restrictions will remain and will almost certainly be tightened, albeit in a more systematic and targeted way, Thawley adds, given the growing support for such measures in Washington.

"Overall, the trajectory of the U.S.-China relationship is becoming clearer, and the fundamentals would not be different under a Biden administration," Thawley says. "The intensity of the strategic competition will not have diminished. In a few years, we could end up with a much more tightly defined but still substantial bilateral economic relationship."

Reagan Anderson is a Senior Vice President of Government Relations at Capital Group. She has 19 years of industry experience and has been with Capital Group since 2015. Prior to joining Capital, Reagan worked as a senior vice president for congressional affairs at the Consumers Bankers Association in Washington, D.C.

Jason Bortz is a senior counsel at Capital Group. He has been practicing law for 22 years and has been with Capital Group for eight years. Throughout his career, Jason has worked on tax and retirement plan issues. Prior to joining Capital, Jason was a partner in a Washington, D.C., law firm. Before that, he was a law clerk for a federal court of appeals judge. He holds a juris doctor degree from Cornell Law School and a bachelor’s degree in philosophy from Hamilton College. He is a member of the California, New York State and Washington, D.C., bars. Jason is based in Los Angeles.

Matt Miller is a political economist at Capital Group.  Since joining Capital in 2014 his duties include analyzing U.S. policy trends that affect investment decisions and hosting the Capital Ideas podcast. He has 33 years of industry experience, including stints as a senior advisor at McKinsey, a Washington Post columnist and author, host of public radio's "Left, Right & Center" program, and a Clinton White House aide. He has a law degree from Columbia and a bachelor's from Brown.

Michael Thawley is a political economist at Capital Group. Before joining Capital in 2008, he served as Australia's ambassador to the U.S., secretary to the Prime Minister and head of the Australian public service. He holds a history degree from the Australian National University.