How much do elections impact the stock market

Should elections even matter to long-term investors in the first place? These are questions investors and wealth managers are facing as we approach November 3rd. To provide answers, our research partners at the Capital Group have analyzed more than 85 years of data and identified five ways that elections influence markets and investor behavior. We have shared this article with their permission.

A simple stock market metric has correctly predicted the winner in 20 of the last 23 presidential elections since 1936  — a track record that might make even the top pollsters jealous. If the S&P 500 Index is up in the three months prior to Election Day, the incumbent party usually wins. If markets are down during that period, the opposing party typically claims victory.

Why is this? It’s because equities tend to look ahead and “price in” uncertainty — including that caused by an upcoming election.

When the stock market and the economy are strong, there is usually less motivation for a change in leadership. In those years, stocks may not need to discount the uncertainty, which often allows stocks to continue rising, further bolstering the incumbent’s chance of reelection.

When the political and economic climate are more challenging, there is a greater chance that the opposing party will win. The market discounts the added uncertainty of the election outcome and what policy changes may occur, which can lead to higher volatility.

What does this mean for 2020? As of September 15, the S&P 500 is up 3% since August 3rd (three months prior to Election Day) and 5% year-to-date. In more normal times that would favor the incumbent, but  today’s shaky economy offers a different story. Since 1912, only once has a president been reelected if he oversaw a recession within two years  of the election. While this trend may be interesting, investors shouldn’t use it as an excuse to try to time markets.

Historically, whether the incumbent wins or loses, election volatility has usually been short-lived and quickly given way to upward moving markets.

2) Gridlock or sweep? Equities have gone up either way 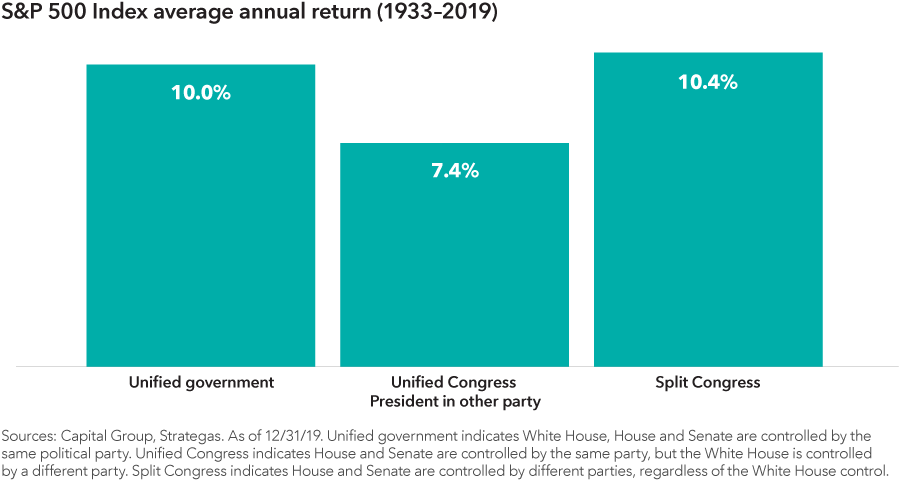 One of the biggest concerns investors have this election cycle is the possibility of a Democratic sweep of the White House and Congress. Many assume this so-called “blue wave” will lead to a reversal of policies like deregulation or the Tax Cuts and Jobs Act of 2017. While it’s true that a new party typically brings its own policy agenda, assuming such an outcome will lead to meaningfully lower stock prices is probably over-simplifying the complexities of stock  markets.

History shows that stocks have done well regardless of the makeup of Washington. Since 1933, there have been 42 years  where one party has controlled the White House and both chambers of Congress at the same time. During suchperiods, stocks have averaged double-digit returns. This is nearly identical to the average gains in years when Congress was split between the two parties. Historically the “least good” outcome has been when Congress is controlled by the opposite party of the president. But even this scenario notched a solid 7.4% average return.

What does this mean for 2020? This year’s election will almost certainly end in either a unified government under a blue wave or a split Congress, which could happen with either a Trump or Biden victory. Voters may have a strong preference, but investors should take comfort that both scenarios have historically produced strong equity returns. 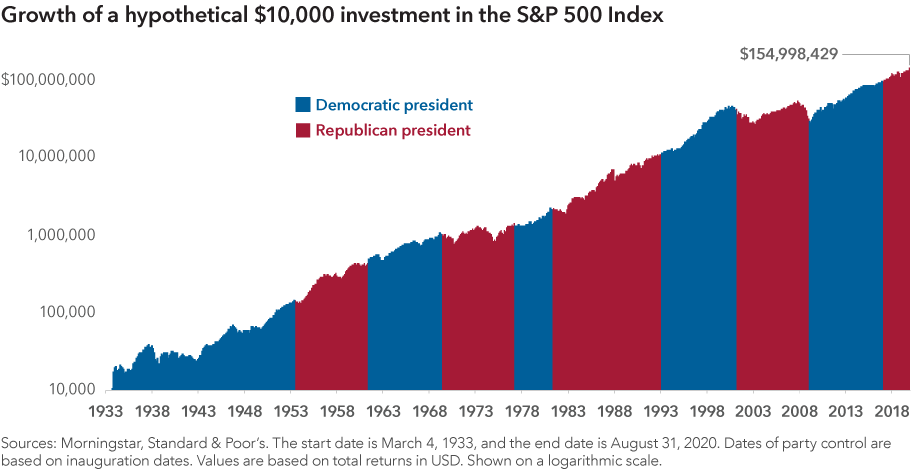 Politics can bring out strong emotions and biases, but investors would be wise to tune out the noise and focus on the long term. That’s because elections have, historically speaking, made essentially no difference when it comes to long-term investment returns.

Which party is in power hasn’t made a meaningful difference to stocks either. Over the last 85 years, there have been seven Democratic and seven Republican presidents, and the general direction of the market has always been up. What should matter more to investors than election results is staying invested.

What does this mean for 2020? Some have called the 2020  election the most important in our lifetime. But that has been said about previous elections and will be said again about future elections. This year has been unique in countless ways, but a look at past election cycles shows that controversy and uncertainty have surrounded many campaigns. And in each case the market continued to be resilient. By maintaining a long-term focus, investors can position themselves for a brighter future regardless of the outcome on Election Day. 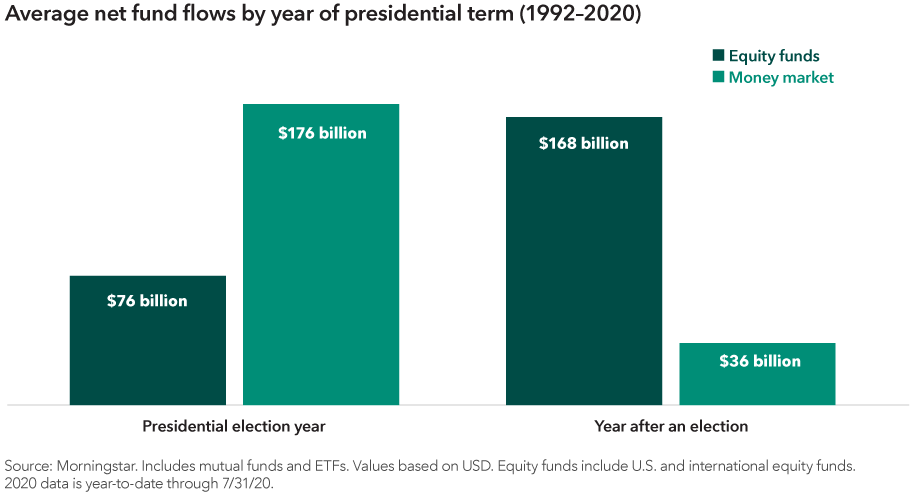 It can be tough to avoid the negative messaging around election coverage. And it’s natural to allow the rhetoric of political campaigns to make us emotional. History has shown that elections have had a clear impact on investor behavior, but it’s important that investors don’t allow pessimism to steer them away from their long-term investment plan.

Investors have poured assets into money market funds — traditionally one of the lowest risk investment vehicles — to a much greater degree in election years.  By contrast, equity funds have seen the highest net inflows in the year immediately following an election.

This suggests that investors want to minimize risk during election years and wait until any uncertainty has subsided to revisit riskier assets like stocks. But market timing is rarely a winning investment strategy, and it can pose a major problem for portfolio returns.

What does this mean for 2020? This trend accelerated in 2020: Through July 31, net money market flows increased $546 billion while net equity fund flows decreased $36 billion. Of course, part of this year’s flight to safety was related to the pandemic-induced recession and not the election. Still, equity funds saw their largest monthly outflows in July, indicating that investors are remaining conservative ahead of the election. 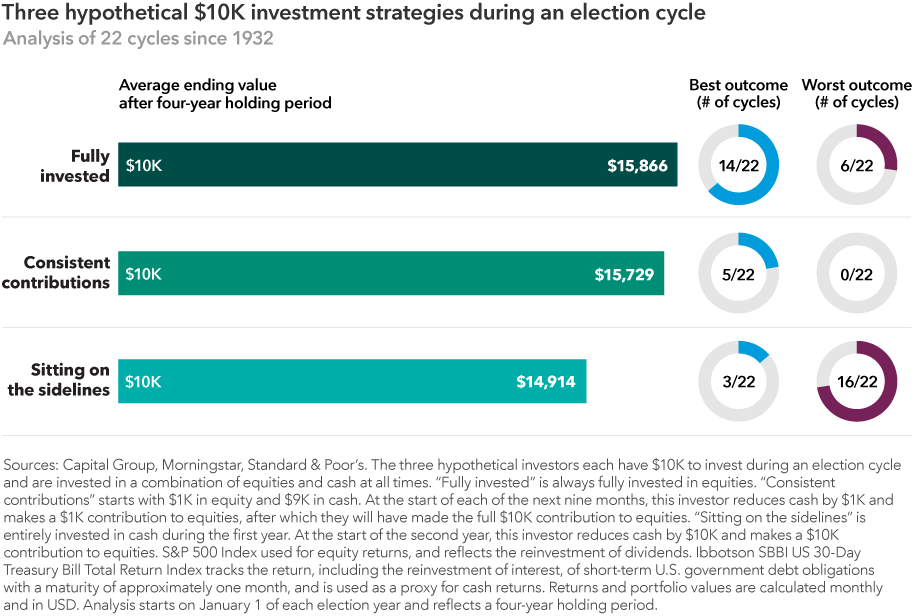 What has been the best way to invest in election years? It isn’t by sitting on the sidelines.To verify this, we looked at three hypothetical investors, each with a different investment approach. We then calculated the ending value of each of their portfolios over the last 22 election cycles, assuming a four-year holding period.

The investor who stayed on the sidelines had the worst outcome 16 times and only had the best outcome three times.  Meanwhile, investors that were fully invested or made monthly contributions during election years came out on top.  These investors had higher average portfolio balances over the full period and more frequently outpaced the investor who stayed in cash  longer. These results reflect four-year holding periods, but the divergence would be even wider if compounded over longer time frames.

Sticking  with a sound long-term investment plan based on individual investment objectives is usually the best course of action. Whether that strategy is to be fully invested throughout the year or to consistently invest through a vehicle such as a 401(k) plan, the bottom line is that investors should avoid market timing around politics. As is often the case with investing, the key is to put aside short-term noise and focus on long-term goals.

What does this mean for 2020? It’s too early to know what the impact of this year’s flight to cash will be on investors’ long-term portfolio returns. But with the S&P 500 soaring over 50% since the March bottom and net equity selling continuing throughout the year, it is safe to assume many investors missed at least  some of this powerful equity rally and remain on the sidelines ahead of the November election.

Investments are not FDIC-insured, nor are they deposits of or guaranteed by a bank  or any other entity, so they may lose value. Investors should carefully consider investment objectives, risks, charges and expenses.

Statements attributed to an individual represent the opinions of that individual as of the date published and do not necessarily reflect the opinions of Capital Group or its affiliates. This information is intended to highlight issues and should not be considered advice, an endorsement or a recommendation. All Capital Group trademarks mentioned are owned by The Capital Group Companies, Inc., an affiliated company or fund.  All other company and product names mentioned are the property of their respective companies.

This content, developed by Capital Group, home of American Funds, should not be used as a primary basis  for investment decisions and is not intended to serve as impartial investment or fiduciary advice. The market indexes are unmanaged and, therefore, have no expenses. Investors cannot invest directly in an index. Past performance is no guarantee of future results.Standard & Poor’s 500 Composite Index  is a market capitalization-weighted index  based on the results of approximately 500 widely held common stocks.Standard & Poor’s 500 Composite Index  (“Index”) is a product of S&P Dow Jones Indices LLC and/or its affiliates and has been licensed for use  by Capital Group. Copyright © 2020  S&P Dow Jones Indices LLC, a division  of S&P Global, and/or its affiliates. All rights  reserved. Redistribution or reproduction in whole or in part  is prohibited without written permission of S&P Dow Jones Indices LLC.