This article comes from our research partners at the Capital Group. The original authors are John Emerson, Jared Franz, and Matt Miller. We hope it is helpful to you.

As President Joe Biden takes office, the prospects for his policy agenda appear more robust than previously thought, following a Georgia runoff election that flipped control of the U.S. Senate.

With Democrats now in charge of the White House, Senate and House of Representatives, some of Biden’s top legislative priorities may encounter less opposition between now and the 2022 midterm elections. But a 50-50 split in the Senate, with Vice President Kamala Harris as the tiebreaker, still means that major new legislation may require some degree of bipartisan support.

Without a commanding Democratic majority, the most ambitious elements of Biden’s agenda are likely to face a difficult, but not impossible, path to approval. That includes large tax increases for corporations and the wealthy, which some moderate Democrats may oppose along with many Republicans, especially while the U.S. economy continues to struggle with the COVID crisis.

“This is not a blue wave scenario,” says John Emerson, Vice Chairman of Capital Group International, Inc.SM and a former U.S. Ambassador to Germany. “With thin Democratic margins in the House and a 50-50 Senate, Democratic moderates will have a moderating influence on legislation. President Biden will work hard to gain bipartisan support where he can.”

Emerson also noted that, historically speaking, the U.S. stock market has performed well regardless of which party controls Washington. That includes many periods when Democrats ruled the White House and both houses of Congress — highlighted by a 26% return for the Standard & Poor’s 500 Composite Index coming out of the global financial crisis in 2009.

U.S. stocks have moved higher since the January 5 runoff election in Georgia, as well. In that race, Republicans unexpectedly lost both Senate seats, resulting in a 50-50 tie. With Vice President Kamala Harris’ pivotal role as tiebreaker, Democrats now control the Senate by a razor-thin margin. U.S. stocks rose to an all-time high on January 8, and continue to post modest gains on a year-to-date basis. 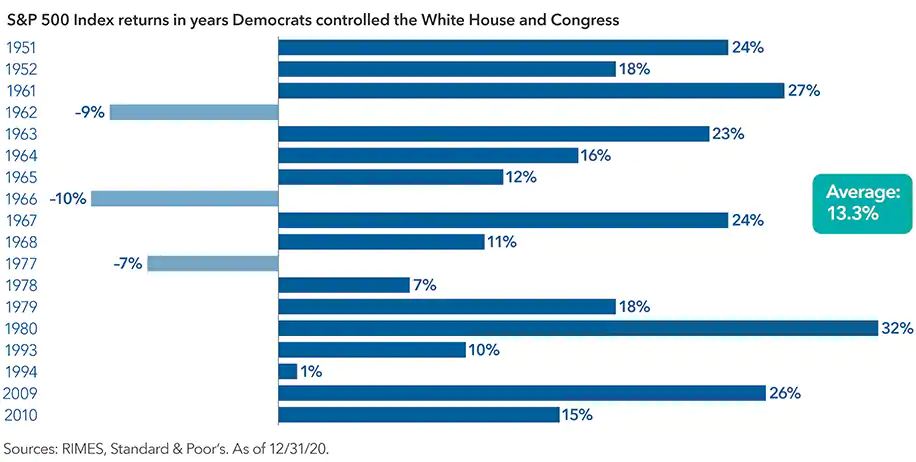 In addition, the outlook for the U.S. economy is marginally better under a political power structure where Democrats may be able to push through larger stimulus bills and higher spending on infrastructure projects, among other spending priorities, says Capital Group economist Jared Franz.

With a vaccine-assisted recovery already underway, Franz expects the U.S. economy to grow at a greater than 3% pace in 2021 — and potentially 4% — depending on how quickly and effectively the government moves to distribute stimulus checks and vaccines to the public.

“Reaching 4% growth is entirely possible, driven by government stimulus efforts, rapid vaccinations and organic recovery from the 2020 downturn,” Franz explains. “My concern, however, is with the unemployment rate (currently 6.7%). I think it will come down slower than most economists expect amid rising layoffs and the retooling of the economy to a post-pandemic labor-light regime.”

High-priority policy initiatives under the Biden administration are likely to include a modest corporate income tax hike, which previously appeared to be off the table when Republicans controlled the Senate.

The Tax Cuts and Jobs Act of 2017 — the most significant piece of legislation passed under President Trump — reduced corporate income tax rates to roughly 21% from 32%. Under the new administration, there is a decent chance of that number moving up in a phased approach to approximately 25%, rather than the 28% tax rate that Biden proposed during the campaign, says Capital Group political economist Matt Miller.

“There probably will be corporate tax hikes at some point, but I think they will be tempered by the concerns of centrist Democrats who don’t want to go too far too fast,” Miller says. “A 50-50 plus the VP majority in the Senate is a different world compared to a 55-seat majority, and I think the outcome of Biden’s policy agenda will reflect that.”

Modest corporate tax increases could be on the way 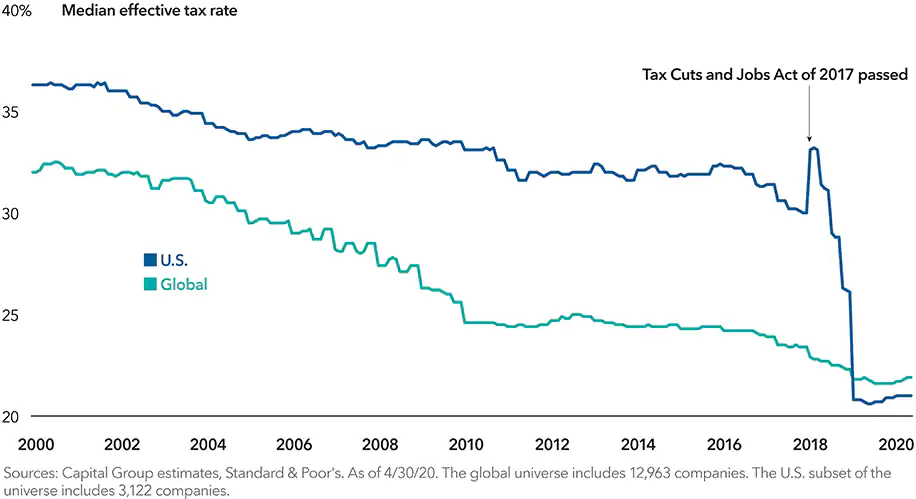 The same holds true for many other hot-button issues, such as levying higher taxes on wealthy individuals and raising the federal minimum wage, both of which were high on the list of Biden’s campaign promises. “Remember, some of these Democratic Senators will be up for reelection in 2022, and they may not want to run on a platform of higher taxes,” Miller notes, “especially at a time when the Senate and House majorities are so narrow.”


The environment and climate change could move front and center, as well, including policies to encourage green investing and more disclosure requirements for public companies related to environmental, social and governance (ESG) matters.

Is Big Tech in big trouble?


Another issue that will likely arise during Biden’s first year in office is greater regulation of the technology industry. Both Democrats and Republicans have supported cracking down on Big Tech in various ways, including more aggressive antitrust enforcement and eliminating some long-standing legislative protections for internet companies.

This is another area where the Georgia runoff election has had a big impact, Miller says, because a Republican Senate could have blocked Biden’s appointments to the Federal Trade Commission and the U.S. Department of Justice Antitrust Division, but that won’t happen in a 50-50 Senate. “I think those appointments will be a lot more aggressive than they would have been if Georgia had gone the other way,” Miller says. “And that means, yes, there will likely be a renewed focus on tech regulation. I don’t know yet how much of a threat it poses to their business models, but it’s something we’ll need to watch closely. At a minimum, I think it will be more difficult for tech firms to gain government approval to grow by acquiring promising competitors.”


Of all the issues competing for Biden’s attention, however, none will get higher priority than the COVID relief and economic recovery efforts already under way. As the president laid out in a January 14 announcement, he will seek rapid approval of a $1.9 trillion spending package that includes $400 billion for vaccine deployment and school reopening, $350 billion to help state and local governments, and $1,400 direct payments to individuals, among other assistance for displaced workers.

The announcement came one day after the House moved to impeach Trump, meaning a Senate trial, if it happens, could compete for time with COVID-relief deliberations and result in legislative delays.

“For Biden’s first 100 days in office, the priority will be COVID, COVID, COVID,” Emerson stressed, “for the simple reason that everything else depends on it.”

John Emerson is Vice Chairman of Capital Group International, Inc. John has 16 years of industry experience (as of 12/31/19), all with Capital Group. He was the U.S. Ambassador to Germany from 2013 to 2017. Prior to that, he was President of Capital Group Private Client Services.

Jared Franz is an economist with 14 years of industry experience as of 12/31/19. He holds a PhD in economics from the University of Illinois at Chicago and a bachelor’s degree in mathematics from Northwestern University.

Matt Miller is a political economist at Capital Group. Since joining Capital in 2014 his duties include analyzing U.S. policy trends that affect investment decisions and hosting the Capital Ideas podcast. He has 33 years of industry experience, including stints as a senior advisor at McKinsey, a Washington Post columnist and author, host of public radio's "Left, Right & Center" program, and a Clinton White House aide. He has a law degree from Columbia and a bachelor's from Brown.

Schedule a meeting with us to discuss