At the Adams Chetwood Wealth Management group, we believe believe that our providing peace of mind to our clients involves keeping them up-to-date with current economic news and projections.  We can't always be right, but we can always try to be wise, and being informed is a step to wisdom-driven decisions.

Our research partners at The Capital Group have allowed us to redistribute this research that they have published pertaining to the current economic status of America, and their and many other economists and experts' projections for the rest of the year.  We hope you will enjoy it, and that you will receive valuable insights from it.

The decade-long economic expansion did not end with a whimper. The coronavirus brought it to a screeching halt.

U.S. gross domestic product (GDP) fell 5% in the first quarter, and a steeper decline is likely in the second. Consumer spending, which accounts for about two-thirds of the U.S. economy, slid 13.6% in April, the steepest decline on record.

More bad news lies ahead in the short term, starting with the tragic human cost. Historic unemployment will likely have a lasting impact on the economy, and many businesses are failing. The path to economic recovery will depend on the course of the virus and public health response, and stock markets may bounce around for an extended period until the economy finds firmer footing.

“The U.S. stock market appears to be priced for a quick economic recovery,” says U.S. economist Jared Franz. “But I expect a more gradual U-shaped recovery with bumps along the way,” he explains.

When will near-term pain give way to long-term gain? “Over the next six months, we will see some challenges, and I expect consumer demand to remain sluggish for some time,” says equity portfolio manager Claudia Huntington, Co-President of The New Economy Fund and a former Co-President of AMCAP Fund. 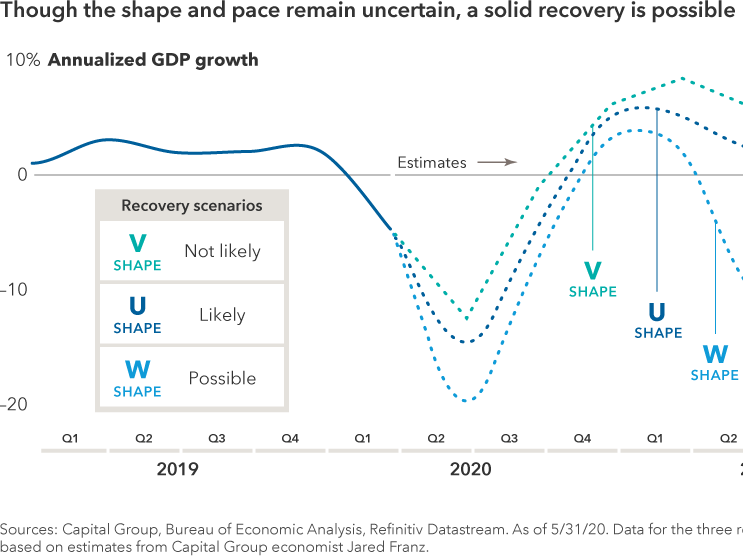 Market recoveries have been longer and stronger than downturns

"That said, my three-year view is very optimistic. I am seeing a lot of long-term investment opportunities present themselves in this environment. There will certainly be ups and downs, but veteran equity portfolio manager Rob Lovelace believes it's a matter of when, not if, we make it across this valley. “Because the slowdown was the result of government policy — not economic imbalances or rising rates 1 we can see what recovery can look like when policies are relaxed,” Lovelace says. “And that to me is reassuring.”

Of course, when you’re in the middle of a downturn, it feels like it’s never going to end. But it’s important to remember that market recoveries have been longer and stronger than downturns. Over the past 70 years the average bear market has lasted 14 months and resulted in an average loss of 33%. By contrast, as measured by the Standard and Poor's 500 Composite Index, the average bull market has run for 72 months — or more than five times longer — and the average gain has been 279%.

Moreover, returns have often been strongest right after the market bottoms. After the carnage of 2008, for example, U.S. stocks finished 2009 with a 23% gain. Missing a bounce back can cost you a lot, which is why it’s important to consider staying invested through even the most difficult periods.

Long-term investors may take comfort in knowing that tough companies have often been born in tough times. Consider these examples: McDonald’s emerged in 1948 following a downturn caused by the U.S. government's demobilization from a wartime economy. Walmart came along 14 years later, around the time of the "Flash Crash of 1962" - a period when the Standard and Poor's 500 Index declined by more than 22%. Microsoft and Starbucks were founded during the stagflation era of the 1970s, a decade marked by two recessions and one of the worst bear markets in U.S. history.

Companies that can adapt and grow in tough times often present attractive long-term investment opportunities. Bottom-up, fundamental research is the key to separating these resilient companies from those likely to be left behind. 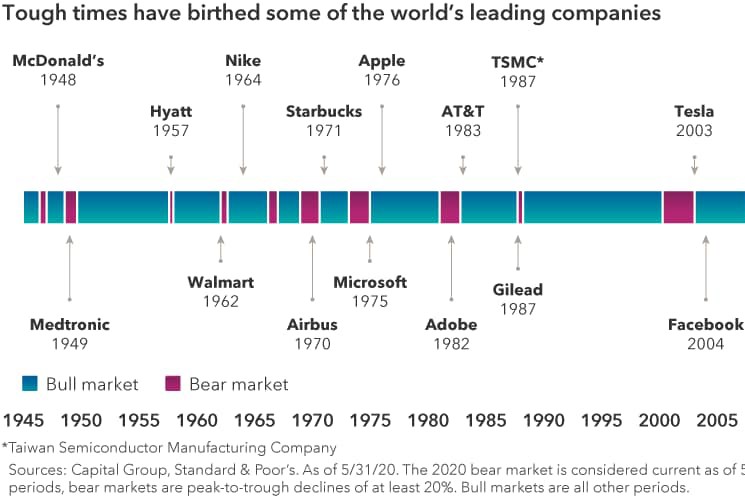